Publishing this one a couple of days later than I had planned. I got a little caught up in my cooking the last few days. 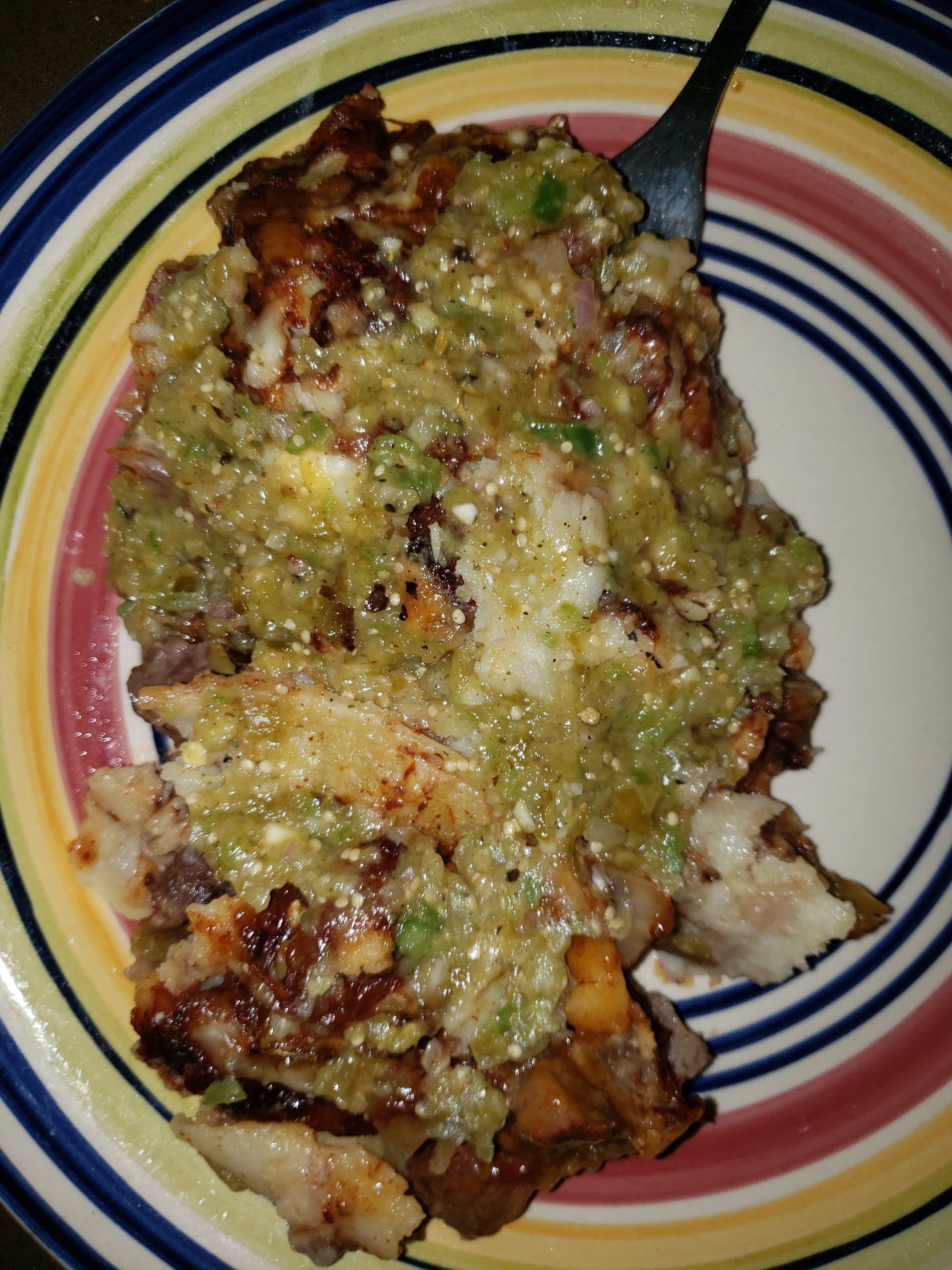 Thursday (4/23), I made leftover tri-tip steak enchiladas. I had made the pepper paste of enchilada sauce a couple…maybe more…I’m losing track of time…weeks ago and stored it in the freezer. I warmed the tortillas in the microwave rather than in oil as I traditionally would. (My husband does not like the greasiness of the enchilada recipe I used in the past.) It worked well, and they were delicious. So delicious that I had some for breakfast Friday morning. I had also made a very nice roasted tomatillo sauce on Wednesday to top them. Now that I think about it, I really should try them with some sour cream. 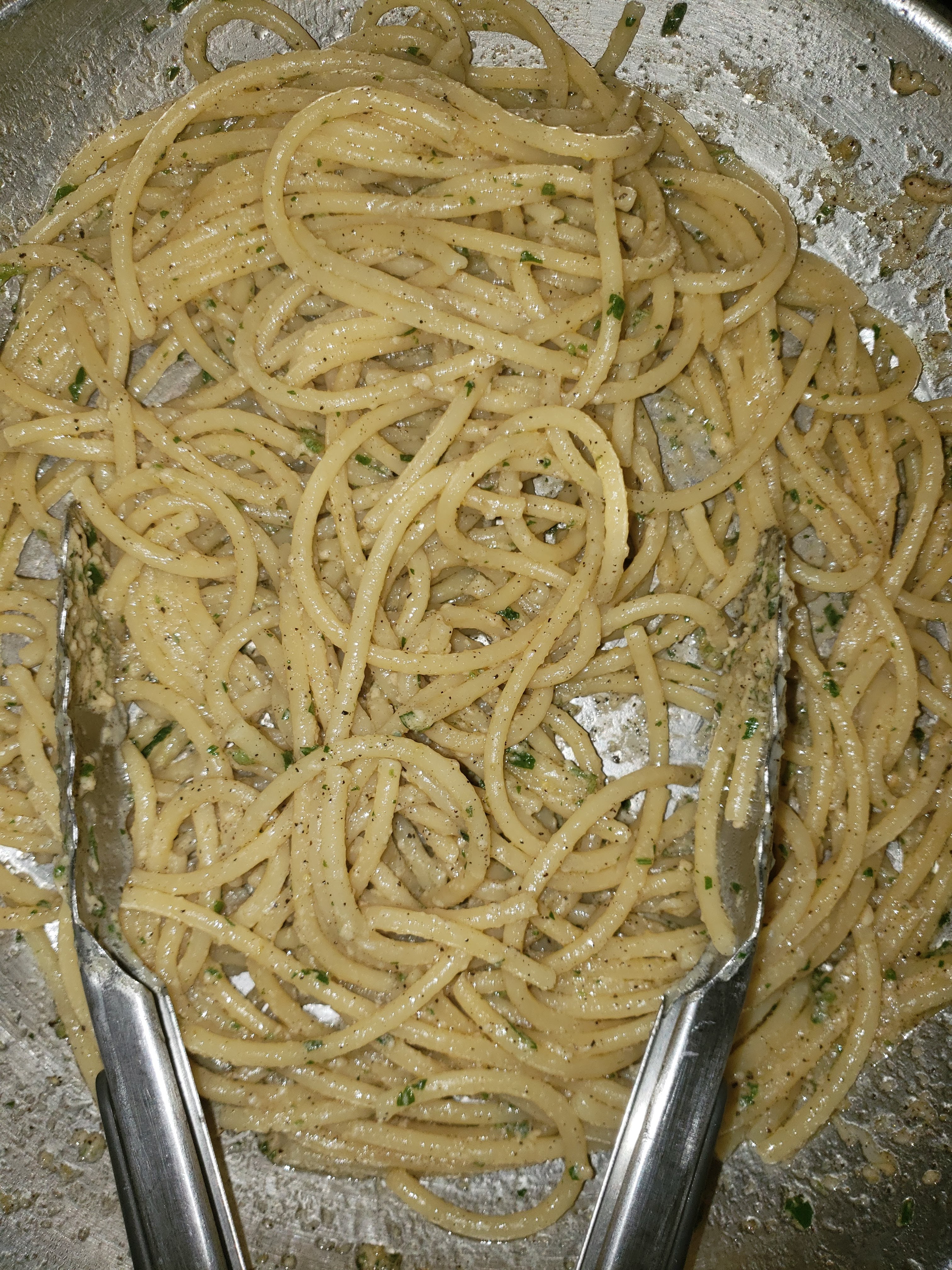 Friday (4/24), I finally decided I wanted to make cacio e pepe, but decided to make Michael Symon’s version with lemon. It was delicious. Our 10-year-old, who professes not to like pepper or lemon, ate every bite on her plate. And I nailed getting the portion right so that we did not have any leftovers, as this isn’t a dish that would really reheat well.

Saturday (4/25) was pretty much a cook-a-thon for me. We ate some leftovers for brunch. I turned some of hte Italian bread into crostini for chicken salad and warmed leftover pinto beans and cornbread for the kiddo. I started my cooking marathon by putting on a pot of vegetable broth in my large Dutch oven and a pot of chicken broth in my instant pot using the slow-cooker function. In the end, I wound up with 6 cups of vegetable broth and 16 cups of chicken broth.

I also made homemade brioche buns. The recipe makes 8, so once they were shaped, I froze four of them, and they can be thawed and let rise one more time for later. I baked four of them and made homemade blackbean burgers for dinner. I made a disgusting pea salad as a side and also served some of the boiled carrots and beats from the vegetable broth. The pea salad was something I remembered having many years ago and liking, but I really did not like it this time. It involves chunks of Velveeta, which I found to be an assault on my tastebuds. See? Even when you cook constantly, some things are gonna flop.

Sunday (4/26) started with ham, cheddar and red onion scrambles. I was able to use the remaining eggwash from my brioche buns in the scramble, and I got a good glaze on the onions and ham before adding the eggs. It was a great balance of flavor. I cooked up a flat egg for the kid. This is what she calls it. It is like an omelet without any ingredients or folding. I call it a dead egg.

For dinner, I made braised pork shanks. The pork shank is, in my humble opinion, one of the most neglected meats. They are tender and full of flavor. And braising requires a few minutes attention up front and then mostly just patience. I was able to get a very good sear on the meat prior to putting it in the braise, which imparts and amazing amount of flavor. I braised in white wine and chicken broth. For the last 45 minutes of cooking, I added some peeled potatoes. It made an awesome dinner.

I also wanted to use the last of the tritip leftovers, which was about a pound. I diced it up in about 1 inch cubes and turned it into beef and barley soup. I used the instant pot to make the soup, which included celery, carrots, onion, barley, spices and chicken broth. After it finished its natural release cycle, I tossed the beef with some cornstarch into the soup and left it on the warm setting for about 30 minutes. Most of the soup is stored in the freezer in individual batches for later. I left a little of it in the fridge for lunch this week, but as the weather warms, I am less inclined to want soup.

Monday (4/27), I had decided I was going to make ravioli using a bag of creamed spinach that has been in my freezer for a while. This particular creamed spinach comes out runny, and so I was not a fan. I had planned to make my own ravioli but realized about mid-day that I didn’t have enough eggs. However, I had previously taken some wanton wrappers out of the freezer with an eye toward making pot stickers. I used them as my ravioli dough and filled them with a mixture of the creamed spinach, ricotta, egg, paremesan and herbs. I served them in a brown butter sauce, and it was delicious!

Tuesday (4/28) was grocery day. Since we were out of eggs, we gave the kid mini-muffins and fruit for breakfast. We then had leftovers for lunch. We only did groceries from our local grocery store this time and did it with curbside pick up. I also picked up flour from my flour guy for us and two friends and dropped it on their doorsteps. After getting home from all that and processing all the groceries, we had leftover pork shanks and potatoes for dinner. But my husband did make me some wonderful “cookies” by making chocolate genache and coating mini peanut butter cracker sandwhiches…so there was some cooking.

Wednesday (4/29) started with my sourdough starter going wild. It was out of the jar and all over the counter! For breakfast, I made ham, cheese and chive scrambled eggs because I was so excited to have ham and eggs again. Then I baked my first Dutch oven bread which had been rising for 36 hours! It came out pretty good but was not quite the color I wanted.

We ended up trading nights to have the little vegetarian, so I made fried chicken thighs in the airfryer for dinner. We didn’t even bother with sides/veggies. Shhh…the kids will never know. I think I seriously made the argument that the chives in my morning eggs counted for the day.

I still had that sourdough starter to deal with. I had already given away several batches of it earlier in the week, so I decided to look up recipes for sourdough starter discard, since I seem incapable of caving to the actual discarding thus far. I found a recipe for crackers and decided to give it a try. They were okay, but I don’t think I got them as thin as needed to crisp up really well. Some were crispy, and those were delicious, but others had a softer texture. They still tasted good, but I wasn’t fond of the softness.

I also went a little crazy this last week with some online shopping for kitchen things. But I checked off a few items on my running kitchen list, and I did it at great prices, so that’s okay…right?

I am a mom, a wife, an attorney and a home cook. I love all things food. I love cooking food, I love writing about food, and I love eating food. I have a vegetarian daughter, a vegan daughter and an omnivore but can't eat certain things daughter. My husband and I are omnivores. This has led to some interesting cooking adventures and that led me to start my blog. View all posts by jrbrugh

This site uses Akismet to reduce spam. Learn how your comment data is processed.